This recipe is only slightly adapted from Giada.  It was one of the first recipes I tried when my husband and I lived in Pasadena and we hadn’t yet had kids (though Matthew was cooking.)  We really liked Giada’s original version (I have this thing where I really like to try recipes as they are written before I go crazy and change anything) but there were just a few things I noticed right away.  First, her recipe calls for a cheese sauce which even though it’s delicious, it’s definitely not the healthiest choice.  My stomach tends to be a tiny bit sensitive to overly-fatty dishes and while I enjoyed her version, I didn’t feel the greatest after eating it.  Secondly, the fontina cheese that the recipe calls for isn’t cheap and yes, I know cheaper isn’t always better, but if I can do cheaper and healthier…well, that’s what we tried to do.  And finally, she’s an amazing chef and willing to go the extra mile to have a dish not just turn out delicious, but look pretty too.  Me, I’m just trying to get dinner finished before anyone in my family kills each other because we all have the grunchies (grumpy+munchies.)  Since the whole lookin’ good on the plate isn’t my first priority, I take just a few shortcuts that save time and really, don’t actually mess with the presentation too much, which I thought might be helpful to post.

All that said, we LOVE this recipe.  I like it so much I was willing to go shopping with my kids to get everything we needed for it.  I’ve only have like seven posts, and I’ve already complained about shopping with children in tow so this is a big deal for me.  This particular day it was a nightmare!  I started out at Trader Joe’s, which if you’ve been in one you know it’s always kinda cramped.  I’m not sure why, but in California (at least in Pasadena), Las Vegas, Salt Lake, and now Ann Arbor, the Trader Joe’s seem to be too small for the number of people that are always trying to shop there.  Lindsay and Matthew were following behind the cart and goofing off as usual, but they kept running into people because they tend not to look where they’re going.  I finally put Matthew in the cart and two minutes later Lindsay was holding onto his leg while he was kicking/swinging her around and she was flying into people.  After a quick talk about how I know they hate shopping, but we have to do it, and they need to be polite yadda yadda, we turn the corner and they both shout, “Look at him, Mommy! He’s so little” and they are pointing at a little person.  I was mortified.  Truly.  (And I didn’t think that word was actually strong enough to express how I felt so I looked it up just now.  Let me just say that “to humiliate or cause shame” doesn’t cut it, but it stems from the Latin “mortificus” which means “produces death” and since yes, I wanted to die, I guess we’ll go with it.)  I smiled apologetically at the man which took all the effort I had because I wanted to cry.  I rushed down the aisle trying to shush my kids while they asked things like, “Is he a kid?  Does he have kids?  Why is he so small?  Does he play with toys?  Can he drive?  What’s his name?”  I tried to explain that God makes people in all shapes and sizes, but that we don’t point or stare at people or we can hurt their feelings.  My pleas for them to leave that man in peace were not heeded by my three and four-year-old though, because every time he was in our sights Lindsay was asking a new question and Matthew was staring so badly I thought he might unscrew his head.  My solution to this problem?  Well at this point I had about as much as I could take so I left the store in a rush knowing full well that I didn’t have everything on my list.  We had to pass the poor man again while I attempted to nonchalantly move pointed fingers back down to their sides and ignore more questions.  I was in such a a daze that the cashier asked me, “Would they like some stickers ma’am?”
“Uh yes,” I replied and then I blinked and shook my head, “Wait, what?”
“Would your kids like stickers?”
“Umm probably, but no.  They can’t have stickers today because they don’t deserve them.”  And then he smiled at me while probably thinking that I am the worst mom ever and his mom was better and nicer and more patient than me.  The kicker is that after I buckled kids in their carseats, unloaded the groceries from the cart into the car I put my head on the steering wheel knowing that I had just left without everything on my list.  Meaning I was headed to yet another store…

Anyway, back to the recipe.  I start with the sauce first.  This is the same marinara sauce I use for my lasagna and chicken parmesan.  It’s easy to make and delicious.

Drizzle the pan with olive oil and slightly cook the garlic.  Then add the rest of the ingredients and bring the sauce to a boil. Turn down to warm while you make the rest.

I start boiling the water for the manicotti.  You’ll need one box or about 12 shells.  Then I make the filling.

Chop the leaves into 1-inch pieces. In a large nonstick skillet, heat the oil over medium-high heat. Add the onion and cook until soft, about 5 to 7 minutes. Add the garlic and cook for 1 minute longer. Add the chard and cook, stirring constantly, until wilted, about 2 minutes. Allow the mixture to cool slightly. Place the ricotta cheese, peas, mozzarella cheese, Parmesan cheese, basil, salt, and pepper in the bowl of a food processor. Add the cooled chard mixture and blend until smooth.  Now is a good time to preheat the oven to 375 degrees. 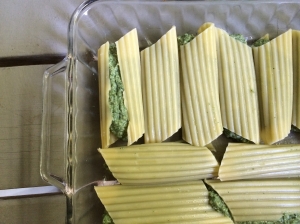 At this point Giada recommends using a pastry bag to put the filling into the manicotti.  Honestly, that takes too much effort and makes an even bigger mess.  At out house I’m less worried about presentation and more worried about speed.  Around dinner time each night I’m trying to feed a starving family who all have the grunchies (grumpy+munchies) which doesn’t make any of us fun to be around.  This is where my shortcut comes in.  I use a knife and slice each of the manicotti in half lengthwise.  Then I just add a spoonful of the filling and press it together and flip it over leaving the cut side down.  I’ve made this dish countless times and the filling is thick enough that it doesn’t come out while baking.  At this point you could add shredded rotisserie chicken if you wanted.  After cramming all the manicotti in there and adding the sauce on top no one will ever know you took the easy way out to stuffing your manicotti shells. 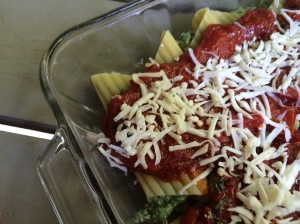 🙂 The picture shows how I’ve stuffed all the manicotti but have not yet flipped over the one on the left.

Now spoon the sauce over the top and sprinkle on your desired amount of mozzerella cheese.  Bake for 30-35 minutes or until the cheese is golden.

PS- The great thing about this recipe is that it can be made in stages.  It’s easy to whip up the filling or sauce earlier in the day (or even the day before) so that there isn’t as much prep work the night you’re planning on having this for dinner, which is ALWAYS a plus. 🙂 Happy eating!