I have been looking through my grandpa’s recipe book and he had a recipe for “Chinese Salad.”  The ingredients were what I’ve seen in the typical Ramen Noodle salad with cabbage, green onions, and a package of Raman Noodle mixture. 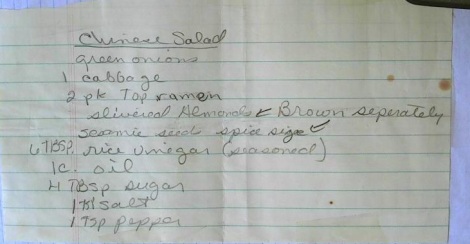 I’ve never made a salad like this, so I thought I would give it a try.  The problem was that I wasn’t sure what types of flavors would go well in his salad since I’ve never made it myself.  Lucky for me, I found a delicious version on gimmesomeoven.com.  The changes that I made were mainly to add more toppings (as I tend to do with all my salads 🙂 ) and I also changed the dressing.  The original dressing sounded too similar to a dressing I already use for my Asian Chicken Salad and let’s be honest, if I’m going to make a new kind of salad I don’t want it to taste like an old one.  It also had double the oil that I put it, but I really didn’t think it needed more than 1/3 of a cup especially with the juice from the mangoes.  I tried using the seasoning packet like I’ve seen in other recipes and I liked it.  I know it’s not the best for you and the next time I have soy sauce (I ran out before making this salad) I might try Ali’s Asian Honey Vinaigrette.  For now, we loved this version.

Funny story about my grandpa.  He was a joker.  He used to go for walks every morning around town and before he headed home he would make his way to our house for an early cup of coffee.  While in high school I often woke up to the sound of his voice or his laughter echoing through the house.  I would smile and get out of bed knowing even at eighteen I could still go sit on my grandpa’s lap and say good morning.  Of course, that’s if I was lucky.  If I wasn’t I woke up to him standing over my bed with a squirt bottle soaking my face and telling me it was time to rise and shine.  Or sometimes it was awaking to loud clatter of two lids he would clang together over my head.  And since he knew my sister liked to sleep in a whole lot of nothin’ I was his only target while she got off easy!  Well, he was known for playing pranks on people and in college we lived with him and grandma up in Flagstaff for summer and early fall while they avoided Parker heat.  One afternoon I was bending over to get something out of the fridge and he snuck up behind me and poked me in the bum with a knife.  I was so shocked I whipped around and without thinking hit him in the shoulder.  He laughed and I gasped and a day later he had a bruise that ran from his shoulder to his elbow.  He blamed it on blood thinners and told me he deserved it, but talk about feeling guilty!