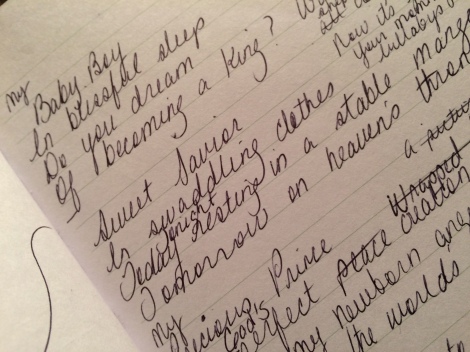 Mary must have been an amazing woman.  The creator of the universe chose her to have His son.  If that’s not a compliment I don’t know what is!  I’ve been reading through the Christmas story this year and as a mother myself, I can’t help but look at it through her eyes.

The Bible teaches us that Mary was a Godly woman from her encounter with the angel.  I have no doubt in my mind that Mary was humble and God fearing, loving, kind, innocent, and all those other positive adjectives we could add onto someone’s characteristics, but I also know she was human.  I’m sure she had moments of pride for having carried the savior of the world.  I’m sure she had just as many moments of complete terror rather than trust.  I bet that sometimes she wished all her sons could “just be like Jesus.”  Before Jesus was born I’m sure she asked, “Why me?” when people in town heard that she was engaged to Joseph and pregnant (the scandal!) gave her dirty looks or talked behind her back.  God changed everything for Mary when she became pregnant, and I think it’s safe to say that for those nine months she questioned whether it was for the better.

I’m guessing that when Jesus was born Mary had so much to be thankful for.  I mean, if she was ever worried about her reputation being tarnished, she must have felt completely redeemed when Jesus was born.  God’s birth announcement for Jesus was in the form of a choir of angels singing to shepherds!

13 Suddenly a great company of the heavenly host appeared with the angel, praising God and saying,
14 “Glory to God in the highest heaven,
and on earth peace to those on whom his favor rests.”
15 When the angels had left them and gone into heaven, the shepherds said to one another, “Let’s go to Bethlehem and see this thing that has happened, which the Lord has told us about.”
Luke 2:13-15

A star was set in the sky to lead the Magi to her child so they could bring Jesus gifts and worship him!

9 After they had heard the king, they went on their way, and the star they had seen when it rose went ahead of them until it stopped over the place where the child was. 10 When they saw the star, they were overjoyed. 11 On coming to the house, they saw the child with his mother Mary, and they bowed down and worshiped him. Then they opened their treasures and presented him with gifts of gold, frankincense and myrrh.
Matthew 2:9-11

I’m not gonna lie.  I know that angels appeared to Joseph and told them Mary’s situation, but it would make me more than a little happy if I knew that while angels were singing or wise men were bowing, or shepherds were praising, Mary glanced up at Joseph with raised eyebrows and whispered, “Told you so.”

Mothers everywhere rejoice when they give birth to a child.  The first one is extra special because everything about the experience is new.  If I had to pinpoint only one point in my life I felt God’s presence it was when I gave birth.  I knew I was experiencing a miracle.  Becoming pregnant changed the entire course of Mary’s life.  Becoming the mother to God’s son did too.  She not only felt God’s presence, but helped be a part of delivering His presence into the world!

Mary gave birth to Jesus, the Son of God.  I know that weighed heavily on her mind.  I would like to think though, that along with thoughts of eternity, heaven, grace, and running for their lives, that some of Mary’s thoughts would have been a whole lot simpler.   On Christmas night after the wise men had finished worshipping and the shepherds returned to their fields, when the animals finally stilled, I picture a brand new mother enjoying her first baby.

A choir of angels announced your arrival
With a song that shepherds could hear.
Now it’s just your mommy
Singing lullabies in your ear.

My baby boy
In blissful sleep
Do you dream
Of becoming a king?

Does the voice of your Father
Whisper to you while you rest?
Do angel’s wings enfold you
While at your mother’s breast?

My sweet savior
In swaddling clothes
Tonight resting in a stable manger
Tomorrow on heaven’s throne.

The world doesn’t deserve you
And my son neither do I
Tomorrow you’ll be the world’s gift
But for tonight you are only mine.