TGI Fridays sometimes carries a Cinnabon Cheesecake on their menu, but like all of our favorite restaurant items, sadly it is seasonal.  Mike and I first tried it in California (a time before kids when we actually went out to eat) and we LOVED it!  Since it was never around when we needed it, I started trying various online versions, none of which lived up to our expectations.  After continuously being utterly disappointed, I was forced to come up with my own.  Let me just say that Mike’s eyes get big and round and he does a happy dance when I say I’m making one of these cheesecakes, and whenever it’s his turn to pick which type of cheesecake he wants, this is always the winner. What’s funny is that this isn’t only Michael’s favorite cheesecake.  This December when I went home Nando (my brother-in-law) asked me to please make him one, which is when I took these pictures.  It made me laugh because it reminded me of the time Mike and I took Lori and Nando to try their first Cinnabon Cheesecake.  They had come to stay with us in California before we were going to head to Kauai for a couple’s retreat.  Mike and I didn’t have kids yet and Lori and Nando had left theirs with grandparents, so we all enjoyed a night out before catching a flight the next morning.  What’s funny is that we didn’t go to TGI Fridays for dinner.  We went somewhere completely different.  Then when we decided maybe we did have enough room for dessert we ordered some Cinnabon Cheesecake to go and ate it in the car on the ride home.

We were trying to be frugal so we ordered two slices to share among the four of us.  What’s funny is how each couple dealt with the fact that we had to share.  Mike was driving so I would dutifully take one bite and then feed him his bites after each of mine.  We ate slow and sighed gluttonously after each bite.  Lori and Nando each took their first bite and then a war broke out in our backseat.  It sounded something like this: “Oh my gosh that is soooo good,” Nando groaned. “Mmmmmm…delicious!” Lori exclaimed.

“Hey gimme more of that!” Nando said reaching for the cheesecake.

“It’s not your turn yet, your bite was bigger than mine.  I need to catch up!”  Lori argued.

“Oh wait!  Holy cow!  Now we’re even.  That was twice as big as my first one.  Now I’m keeping it!” Every once in a while I would glance in the back and see forks flying towards the cherished cheesecake.  They were both out of their seat belts trying to ensure he or she would get the next bite.  Mike and I were dying laughing in the front seat and still had probably half of our piece of cheesecake left when Lori and Nando had finished theirs. “Nando, look.  They’re still eating and ours is gone.  Lisa’s not even cheating.  She’s feeding Mike nicely.  What does that say about us?” Lori asked through giggles.

“They’re nicer than us,” Nando laughed.  “Which means we could overtake them, steal their cheesecake and eat the rest ourselves,” he whispered, loud enough for us all to hear. 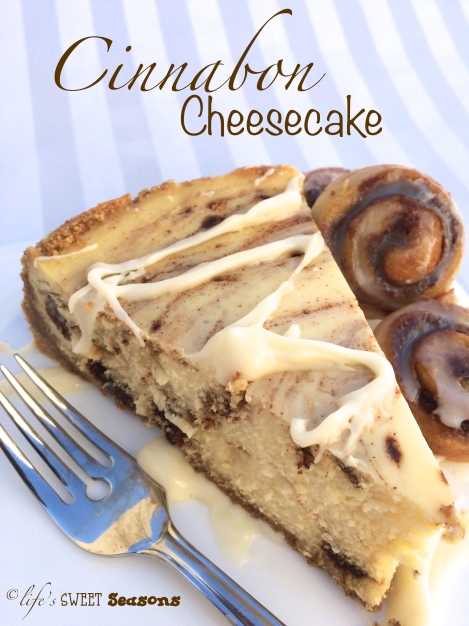 There is a reason this is a family favorite.  It’s beyond delicious, tastes like Cinnabon, and incredibly fattening (don’t bother trying to count calories-just enjoy) but you can exchange Neufchâtel for the regular cream cheese and no one will know.  It’s also slightly more time consuming than the average cheesecake because there’s a few more steps, but trust me, it’s worth it.  I use cinnamon graham crackers for the crust and still add more cinnamon to the mixture.  That’s not a typo.  In fact the first time I used cinnamon graham crackers it was a mistake because I was too lazy to run to the store to buy regular ones.  Everyone noticed the difference and loved it.  They have an extra crunch that the regular graham crackers tend to loose and extra cinnamon isn’t usually a bad thing.  But if you find you don’t have them it’s no big deal, use regular. I’m not gonna lie, I was hesitant to post this on my blog because I was feeling selfish.  This is one of those desserts that I love having all to myself because it makes my family so happy when I can make it for them.  I was able to make everyone’s night (including Nando’s) by having a cheesecake for dessert while I was in Arizona over the Christmas holidays.  I wanted to be able to take him one while he was in the hospital, (see The Miracle of Prayer) but time just didn’t really allow for it.  This way, I guess I don’t have to be around for them to be able to have their favorite dessert, (but I’m secretly hoping they don’t want to take the time to do it so I can still have something special to do for them when I go home.) 🙂  I hope your family enjoys this as much as mine!

For the Cinnamon Filling

Combine above in a small bowl and set aside. Filling

Notes: This makes enough frosting to cover an entire carrot cake, or about 24 cinnamon rolls, so you’ll definitely have leftovers.  Refrigerate the leftovers in an airtight container and plan to have cinnamon rolls the next morning!

One response to “Cinnabon Cheesecake”