It’s Memorial Day so it seems fitting that I should post a food that’s worth sharing with friends or taking to a barbecue.  Everyone seems to have their own version of guacamole, and this is ours.

When I was in college I was a server at Cracker Barrel with my sister.  One of our fellow servers brought in a huge batch of guacamole to share with the crew during break time.  One of her secrets was adding a yellow chili pepper which has a slightly sweet taste and is mildly spicy.  I’ve added that ingredient to my recipe, but since then have adapted it to fit our taste.  While we were still in college Mike and I lived in a house full of people including a few college boys.  (We were married but everyone else was living single so you can imagine the crazy mess that was!)  It wasn’t uncommon for them to have buddies over and be playing video games in the living room.  One of the nicest moments I had during that time was when one of the guys brought home two bags full of avocados and asked if I could make him some guacamole with them.  I wasn’t much of a cook yet for sure, but they knew I could make guacamole.  Not that it’s hard, but I was flattered. 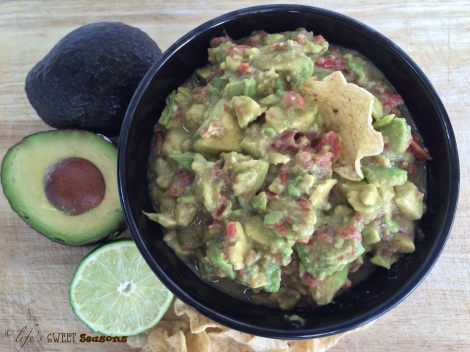 There’s not many ingredients in this recipe, but guacamole should be simple.  All the ingredients are fresh and that’s the only way to do it!

Notes – If you like an extra kick to your guacamole you can leave in the seeds and or veins on both chile peppers.  To save guacamole, lay saran wrap in your bowl to where it’s actually touching the top of your guacamole.  You don’t want any air to get in.  This will keep it nice and green.  Then top it with a lid in addition to the saran wrap.