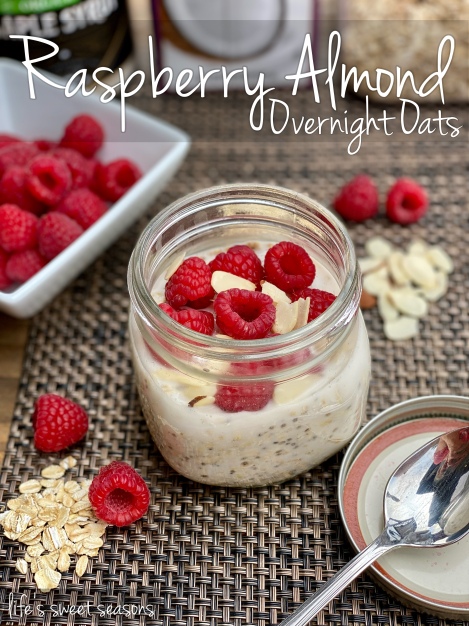 I love oatmeal for breakfast. It’s quick, it’s easy, and it will hold me over until lunch. Last year when I was teaching in Utah I left an entire container of oatmeal in the lounge (along with a bag of brown sugar) so that I could run in and make myself a bowl of oatmeal before heading to my classroom. The only problem with oatmeal is that while it seems like warm soothing comfort food when it’s snowing outside, it doesn’t appeal to me much when the sun is shining and it’s hot out.  I’d rather have a smoothie.

I’ve been reading a ton of recipes on “overnight oats.” This was exciting for me because Matthew LOVES oatmeal in the morning even more than I do. The only problem is that he’s come to love the prepackaged Quaker Oatmeal, his favorite being the apple oatmeal. While I’m sure there are worse things for him to be eating for breakfast, I’ve been trying to figure out how to get him away from the packages and eating healthier oatmeal. I figured overnight oats would be just the thing. 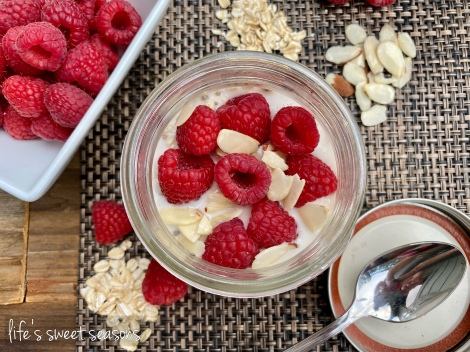 So last week I made two versions of overnight oats. The first was Peanut Butter Cocoa Overnight Oats and the second was this Raspberry Almond Overnight Oats. I thought since Matthew loves peanut butter, oatmeal and dark chocolate this would be a big hit. The fruity version could be mine. I worked for all of ten minutes in the kitchen whipping up two mason jars of oatmeal while Mike shook his head in the living room. “I don’t think he’s going to eat those, Lis.”

“Come on, Mike. Oatmeal, peanut butter, vanilla, cocoa, with dark chocolate chips on top? These are all the ingredients in your no bake oatmeal cookies that you guys like so much. What’s not to love?”

“We’re going to try it. Other people like it.” I said cheerfully.

“Alright.” He shrugged and shook his head. “I’m glad I don’t have to eat it.”

“Oh you be quiet.” I gave him my dirtiest I’m-trying-to-be-mad-at-you face and he just laughed.

The next morning when Matthew woke me up before seven to tell me that he was hungry, I felt prepared. I got up and made a big to-do about the new special oatmeal I had made for him. “See buddy? There’s peanut butter, and dark chocolate chips… mmmmm.” My good boy took a bite and made one of the goofiest faces I’ve ever seen. His nose wrinkled up, he closed his eyes and started shaking his head. It reminded me of the first time we gave him a lemon as a baby. “Mom, I don’t like it.”

“You don’t?” I asked deflated. 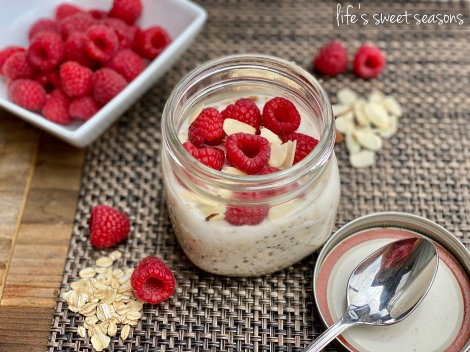 I took a bite to test it out; mushy oats and cold, watery peanut butter. Mike was right. It was gross.  So I was terrified when I opened the second jar and looked into the fruity overnight oats. Would it be another failed attempt at creative oatmeal? Fortunately the answer was no!

These oats still had a slightly firm texture to them, al dente if you can say that for anything other than pasta, which I love. The raspberries keep it fresh, summery and slightly tart, but that’s balanced out with the sweetness of the maple syrup. One of the differences between this recipe and the other is that it doesn’t call for yogurt. Adding yogurt to the overnight oats tends to make things extra moist and mushy whereas, with just milk the oats keep their texture and remain individuals instead of a clumpy mess. Even with warm oatmeal I tend to prefer texture to mush so this is the perfect recipe for me. Also, if you use frozen raspberries, they’ll mix into the oats overnight leaving you with a mixed up raspberry oatmeal. If you use all fresh then the fruit and oatmeal keep their own identities which is kinda nice too. Mike prefers frozen, I prefer fresh. This recipe originally called for coconut milk which doesn’t actually taste like coconut at all! I loved that version, but since coconut milk is high in saturated fat we’ve been using vanilla soy milk instead.

I rushed back to Matthew with these and even though I know he was nervous, he tried them. He liked these a lot better but wouldn’t have an entire serving. Mike on the other hand said, “Well, anytime you feel like making me those I’ll take ’em to work with me. They’re nice and summery.”

I have a feeling that these won’t be the last overnight oats I post this summer. We’re super excited to try all kinds of fruity flavors. And since we’ll be moving to the desert in a few weeks I’m sure we’ll appreciate eating a cool breakfast outside when it’s already warm by nine.  Happy summer!