Mmmmmm…the taste of fall is definitely pumpkin.  I love being able to go get a pumpkin bagel from Einstein’s Bros. Bagels.  It’s even better coupled with a pumpkin latte.  Don’t just order a pumpkin bagel though, I mean that’s good, but if you order the “pumpkin walnut crunch” bagel then it comes with a bunch of fun stuff on top like walnuts of course, and a Dutch apple cinnamon streusel.  I made that mistake once and lucky for me the manager was working the drive-through window.  Apparently my disappointment was written all over my face because after he handed me the bagel and I peeked inside (no I couldn’t wait to actually pull away) and he asked, “Is everything okay?”  Now, usually I lie and say “Oh no, it’s fine” because I don’t like the overwhelming feeling of guilt that twists my stomach when I think I am troubling someone.  But this particular day I had set my mind for a bagel and I had gotten up a little early to make sure the kids and I were ready in enough time to hit up Einsteins.  And trust me, this is a commitment.  Well, for me at least.  Plus I had convinced myself not to buy the cheaper bagel, but to go all out and pay the extra fifty-cents (or whatever it is) for the gourmet bagel.  I never say, “Go big or go home” I’m the cheapskate that says, “Do a little and you’ll save enough to do a little again next time.”  Anyway, I bit my lip, looked at him apologetically, took a deep breath and asked, “What am I supposed to order if I want the bagel in the picture with all the fun stuff on top” I waved my right hand around as if I was sprinkling pixie dust for effect.  He laughed and explained that you need to say, “Pumpkin Walnut Crunch Bagel” rather than just “pumpkin bagel.”  And then he gave me one free of charge and let me keep the inferior “pumpkin bagel” (which was still really good).  Come to find out, that lovely bagel-giving man was also a parent of one of my students, which made parent-teacher conferences funny when we recognized each other.

Sadly, this is not a recipe for pumpkin cinnamon Dutch apple streusel gourmet bagel.  Thank goodness because I’m not sure that would all fit in the title line. 🙂   It is really good though.  If you haven’t have whole wheat pancakes before keep in mind that they seem a little bit heavier than normal pancakes.  The whole wheat makes them slightly nutty though, which is delicious.  It also makes a mother feel better knowing they’re whole wheat after you end up poring a bunch of syrup on top and essentially feed your kids sugar for breakfast.  I’ve tried a couple of different whole wheat pumpkin pancake recipes and they were all good.  One problem I found was that many recipes call for buttermilk and that’s not something I always have just hangin’ out in my fridge.   Another common ingredient is oil and while I know it can be good for you, I don’t want to use it in a pancake if I can use something else.  So this recipe doesn’t have either one of those, and I’ve added one of Mike’s and my favorite spices…cinnamon.  (Poor cilantro and cumin had to step aside for this recipe.) 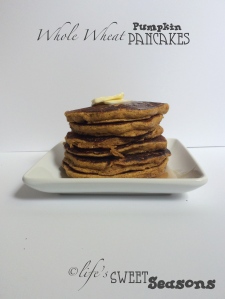