This is one of our favorite salads.  I mean, I know I say that write that? type that? for every single salad, but I mean it this time.  It’s a perfect winter salad because it’s spicy enough to warm you up.  And the ingredients are easy enough to find regardless of the season.  The idea for this salad was born at Oregano’s, which is an Italian restaurant in Arizona.  You can find an Oregano’s in Phoenix, Tucson, and Flagstaff and believe me, if you’re even three hours away, find something to do in one of those cities and then make sure you drop by Oregano’s for lunch or dinner.  You won’t regret it.  Especially if you get a pizzookie for dessert.  Do it.  Go now.  Anyway, on their menu they have a similar salad called “The Pablo Picasso.”  It has a chipotle ranch dressing too and their portions are big enough to serve at least three people.  Mmmmm…

My cousin John’s birthday is today.  It’s funny that I’m posting this salad today because it’s thanks to him that

I love Oregano’s so much.  He took my husband Mike and me there for our first time when we got to college in Flagstaff.  At that point Mike and I were just dating and I was very flattered that John would spend time with us.  He made a ton of suggestions for us to try and they were all excellent.  After that, it became our favorite place to eat.  It’s also thanks to John that I love Jack Johnson.  The first time I heard him John was building a man fort in the backyard of my grandpa’s house where we stayed while in college.  I offered to turn some music on for him so he could listen to something while he was working.  (My bedroom window opened up to the backyard and I just put my speakers on the windowsill.)  I was prepared for loud and obnoxious and instead I found a new favorite artist.  When I asked John, “Who is this?  I like it!”  he raised his eyebrows and said, “You sound surprised, Lis.  Whatdidya think I would play?”  I didn’t answer that, but gave him a shy smile.  I can thank John for a ton of things including helping me walk down the aisle to marry Michael when I was scared out of my mind.  I’ll never forget that I was seriously considering bolting when John told me, “It’s okay Lis.  You look pretty.  And Mike’s a good guy.”  I can also thank John for helping to get me into trouble when we were younger.  He always had the best ideas, like throwing my Grandpa’s lemons off the roof at passing cars…well, the best ideas until we got caught.  Don’t worry, his ideas continued to get better, like spending the last five years drilling wells in Africa to get clean water to remote villages.  Anyway, he’s one of my favorite people and even though I don’t get to see him or his family often, I think about them a lot.  Love you, John!  Happy birthday!

When I was taking pictures for this recipe I couldn’t decide which plate to use, which is very typical if you know me because I’m incredibly indecisive.  It should be said though, that once I make up my mind I’m very stubborn and it won’t be changed easily.  White seems like the typical food blogger dish of choice, but the Mexican style makes me think of color.  So I made two huge plates and took pictures of both of them!  Truth be told I’ve only just begun buying different styles of dishes specifically for blogging and my small kitchen apartment was completely full when I first got here.  I was super excited to come home with my fabulous gigantic blue plate from Ikea and Mike’s reaction was, “Where do you plan on putting that in our already overflowing cupboards?”

“But it was only $2.50,” I reasoned as I held up the blue plate like a prize on a gameshow.  I figured I could impress him with my frugal shopping as long as he didn’t figure in the money I spent in gas getting to Ikea.  (Which is so Mike by the way.)

“But that still doesn’t mean we have somewhere to put it.”  Geeze.  He’s so logical.

“Don’t worry.  I’ll find somewhere.  It’s not like you put away the dishes anyway.”  At this point I stuck out my tongue like a child and he wiggled his eyebrows at me.  I blushed.  “You’re not supposed to do that when I’m trying to be mad at you.”  I headed to the kitchen, which is all of five feet from the living room couch 🙂 to put my new plate in the dishwasher. 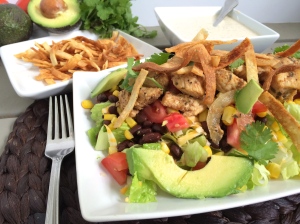 Notes- If you want a thick tangy-tasting dressing you can use the ranch dip and sour cream to make your dressing.  If you prefer a thinner dressing, use the buttermilk ranch packet.  I have used both and think they’re both delicious.