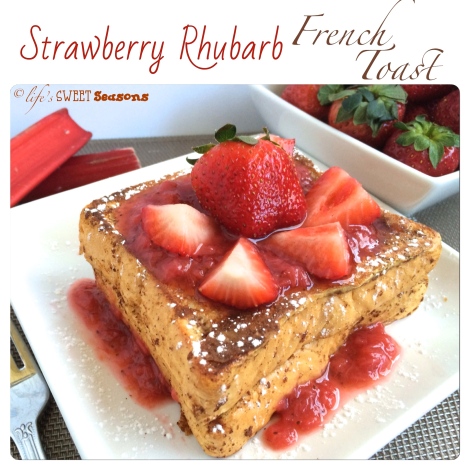 French toast is a big deal at our house.  You can bet that you’ll smell cinnamon and warm syrup coming from our house every Saturday morning.  And I mean, every Saturday morning.  Personally, I’m not too big on sweets for breakfast every single week, but alas, I’m always trumped.  There’s been an occasional Saturday where I’ve made the kids and Michael French Toast and then I’ve made myself an egg sandwich.  In all fairness, this year I’ve gotten more excited about flavored pancakes, but if I have to pick a breakfast favorite that’s topped with syrup then French Toast is number one in my book.  Probably because when I was growing up my mom rarely made pancakes.  At our house we had French Toast and the occasional waffle.

When I was younger I tried to ask my mom how she made French Toast.  Her response was very annoying to me because it sounded so similar to what my Grandpa Sells would tell me.  Like father like daughter.

“So, how many eggs do you use?” I asked with a pencil and paper in hand.

My mom shrugged, “Well it depends on how many people you have.”

“Okay, yeah that makes sense.” I nodded looking at my blank paper.  “Well after the eggs, how do you know how much milk to put in?  Like the ratio of eggs to milk.”  I put the pencil to the paper prepared to jot notes.

“You just know.  You look at the consistency,” she replied as she scrabbled the eggs and milk with a fork.

“You’ll get the hang of it,” she assured me.

“Hmmmph.”  I put down the blank paper and pencil and tried stirring the egg-milk mixture around with the fork, scooping it up and letting it fall and attempting to desperately memorize its “consistency” while convinced I was hopeless. 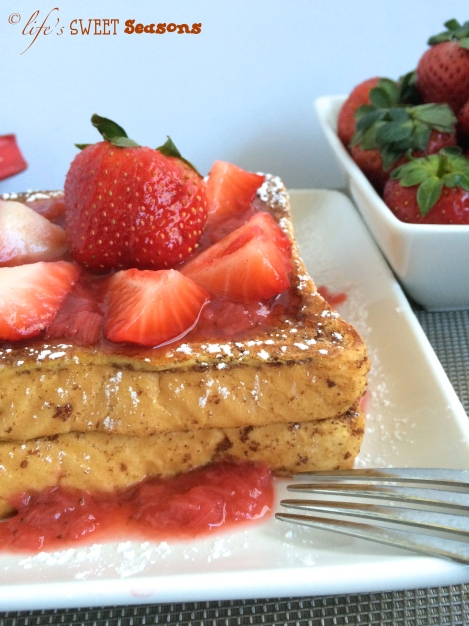 Fortunately for me, my mom was right.  French toast was one of the only things I knew how to make out of high school which means it was one of the few things I knew how to make when Michael and I got married.  I’m sure glad he likes French Toast.  We’ve since perfected it slightly.  Not only do we use Texas Toast which is a thick-sliced bread, but I always freeze it beforehand.  This way, it doesn’t soak up a ton of the egg mixture leaving it sopping wet, but stays slightly crunchy on the outside with a soft inside after it cooks.  So you can add your syrup and the toast doesn’t turn to mush.

Two years ago in March Mike had to attend the AARP conference which is a month long conference held in Washington, D.C for third year radiologist residents.  The first Saturday he was gone I sent him a text asking how he was doing and his response was, “I’m doing good except that my stomach feels weird.  It’s like something’s missing…”  It took me longer than it should have to realize what he was implying.  And his first weekend back I didn’t have to ask him what he wanted me to make him for breakfast.

So while I know that there’s probably a ton of French Toast recipes out there, and I know that it’s something simple to make, I decided to write it down anyway.  This way, someday when Lindsay or Matthew asks me, “So how do you make French Toast?”  I can give them an exact answer.  Plus, I had to try the strawberry rhubarb compote on top of the French Toast.  The funny thing is that I tried it solo first.  French toast, butter, compote, and strawberries.  As Mike was spreading peanut butter on his he was looking at me skeptically with a wrinkled nose.  It tasted okay, but it was too dry.  I held my breath and poured syrup on top while Mike sucked in his breath and asked, “What are you doing?”

“Well, I think this is how they do it at IHOP, right?  I mean, I’ve never been there, but don’t people still put syrup on top of stuff with fruit?”

“I’m going to try it.”  Boy am I glad I did.  As weird as it sounds, that was the key.  Toast, salted butter, compote, fresh strawberries, and believe it or not, maple syrup on top!  I will warn you though, this breakfast tastes an awful lot like dessert…

Our typical French Toast is not fruit covered.  It’s usually strictly cinnamon and topped with salted butter and warm syrup for me and peanut butter and syrup for my silly family.  If that’s what I’m doing the recipe is the same as above but I increase the amount of cinnamon to 2 tablespoons.  Yep tablespoons.  Two of them.  I usually start with about a half a tablespoon stirred into the mix, dip two pieces of Texas Toast, (flipped on both sides) and then add another half a tablespoon of cinnamon for the next couple and repeat until I’ve used all the bread and about 2 tablespoons of cinnamon.  Basically there’s a bit o’ egg with our cinnamon.  🙂  But they sure come out tasty!